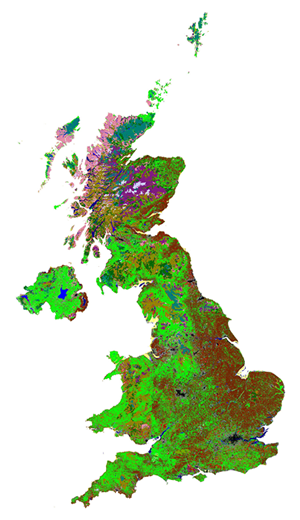 The Land Cover Map 2000 (LCM2000) is a series of data products produced by the Centre for Ecology & Hydrology, based on a parcel-based thematic classification of satellite image data covering the entire United Kingdom. LCM2000 is derived from a computer classification of satellite scenes obtained mainly from the Landsat sensor. It incorporates information derived from other ancillary datasets. LCM2000 was classified using a hierarchical nomenclature corresponding to the Joint Nature Conservation Committee (JNCC) Broad Habitats, which encompasses the entire range of UK habitats. In addition, it records further detail where possible and incorporates land cover classes sought by other users. LCM2000 is produced in both vector and raster formats, with a number of different versions containing varying levels of detail and at different spatial resolutions.

This data collection is included in the following collection